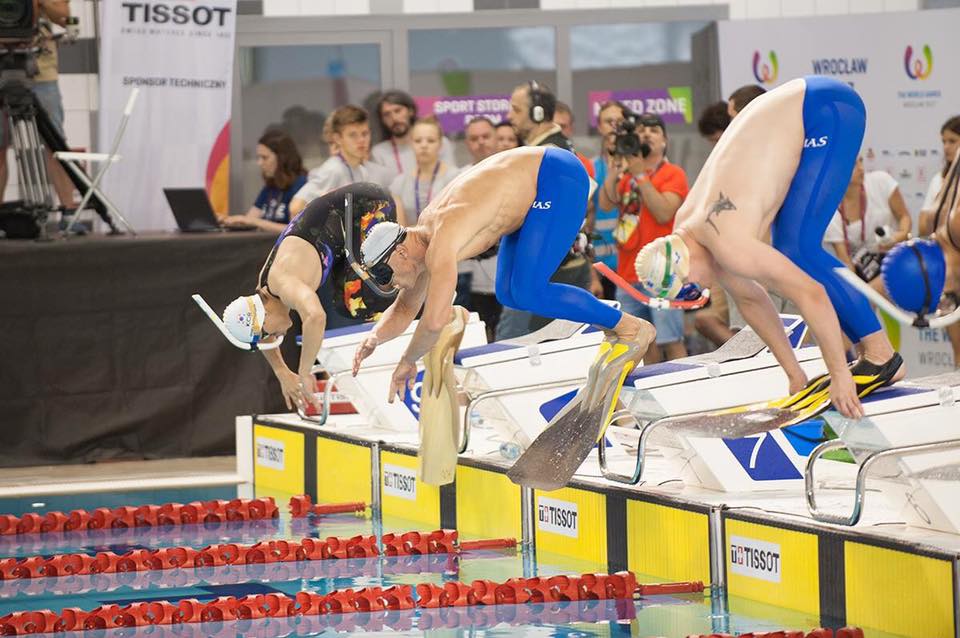 Great show for all the ages in the first day of Finswimming competition at The World Games in Breslaw (Poland). CMAS (World underwater sports federation) is the queen of the first two days of the Games, with an undisclosed Olympic target for his best known discipline, Finswimming. So, for the first day of finals, two athletes shined over the others: the 40 years old hungarian Denes Kanyo, who won gold with an incredible comeback on 400 surface men, and the 15 years old russian Ekaterina Mikhaylushkina, who won silver on women 200 surface individual and then hauled his team to the gold over China with a great comeback in the last relay of 4×100.

Great surprise in the last individual event, with the victory of the 40 years old hungarian Denes Kanyo, with an incredibile comeback in the last 50 meters of the day (gold in 2’58″41). Big upset for german Max Lauschus (gold 4 years ago in Cali), leading for three quarters of the event but just second at the touch in 2’59″02. Bronz for italian Davide De Ceglie (2’01″46).

In the last event of the day, Mikhaylushkina shined again, with a great comeback in the last 100 meters for the victory of Russia (with also Baranovskaya, Anna Ber and Aleksandra Skurlatova gold in 2’34″78, just 0″24 short from its own world record), in front of China (silver in 2’35″16 with Chengjing Shu, Peiyao Xin, Simin Liu and Yichuan Xu). Bronze medal for Colombia (2’36″83 with Grace Fernandez Castillo, Viviana Paola Retamozo Olaya, Kelly Ximena Perez Rubio and Paula Alejandra Aguirre Joya).

With 5 golds in the second and last day of competition, russian dominates water and medal table: 15 years old Mikhaylushkina shines again with Zhurman, Kabanov and Arbuzov. Double for hungarian Senanszky

As the famous episode of Star Wars saga, Russia strikes back in the second and last day of competition for Finswimming at The World Games in Wroclaw (Poland). CMAS (World underwater sports federation) it has been the queen of the first two days. Russia dominated the last day ot the competition and the final medal table, with an incredible strike of golds: 4 in the first 4 events, then another one on the closing relay, for a total of 8 in two days and an undisputed first place on final medal table.

So the last day’s finals afternoon was opened with the gold of russian Pavel Kabanov on 50 aponea men (13″87), already bronze yesterday on the 100 surface, followed by colombian Mauricio Fernandez Castillo (silver medal in 13″94), respectively second and third 4 years ago at The World Games in Cali, and sout-korean Dong Jin Lee (bronze in 14″09). Gold for Russia even on 50 bi-fins men with Andrey Arbuzov (18″55, just 0″34 shy from his own world record), who beated czech Jakub Jarolim (19″08) and belarus Dmitry Gavrilov (19″18), respectively bronze and gold yesterday on 100 bi-fins. The third gold in a row for Russia was then signed by 15 years old Ekaterina Mikhaylushkina on 100 surface women in 38″40 (silver in 38″60 for chinese Chengjing Shu, the world record owner, and bronze for the other russian Anna Ber in 38″72). Mikhaylushkina already shined yesterday, with the silver on 200 and then hauling Russian to gold with an incredibile comeback in the last relay of the 4×100 over China.

In the final event of the Finswimming days in Wroclaw, Colombia was disqualified and Russia won gold on 4×100 surface relay (as 4 years ago in Cali) with Kabanov, Aleksey Kazantsev, Kokorev and Zhurman in 2’16″54, the new world record. Italy was silver in 2’19″02 with Kevin Zanardi, Andrea Nava, Stefano Figini and Cesare Fumarola, Germany gained bronze in 2’19″44 with Max Lauschus, Poschart, Florian Kritzler and Malte Striegler. 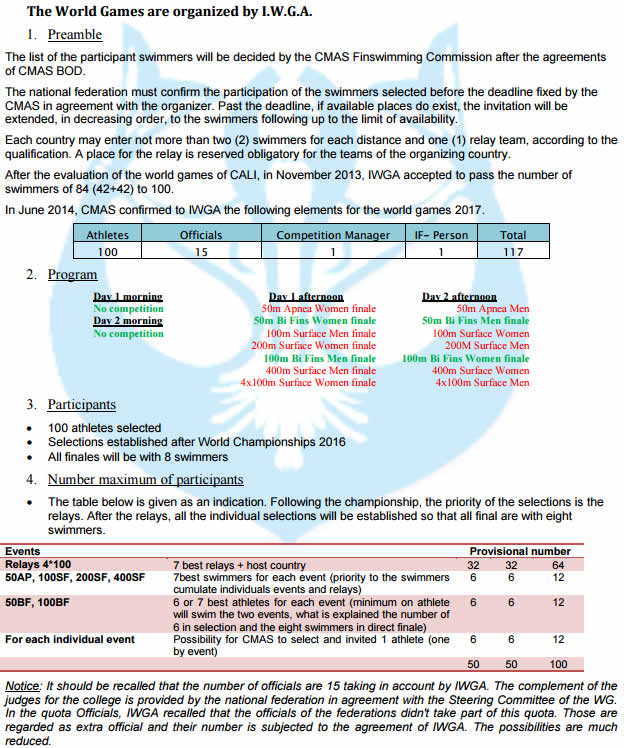