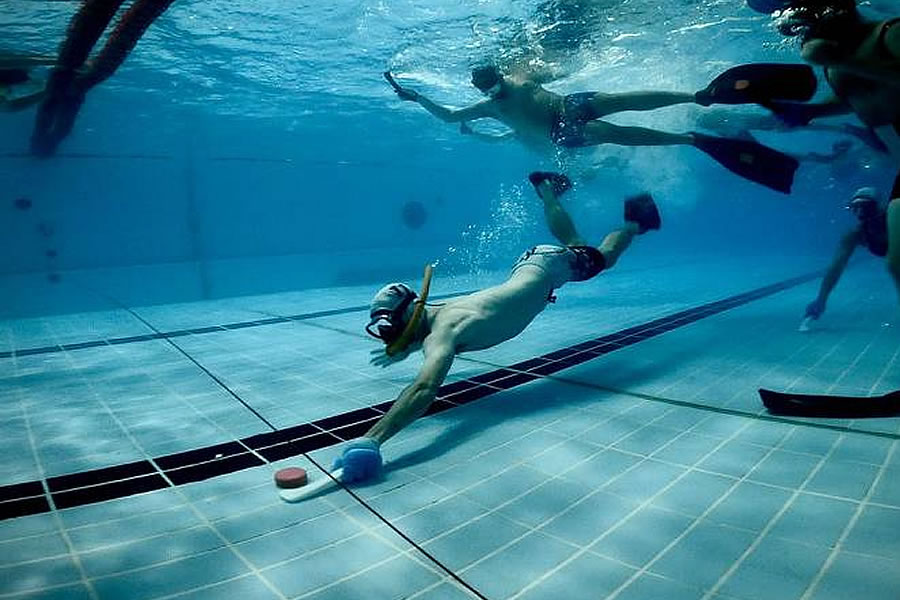 It’s taken underwater hockey a very long time to gain mainstream acceptance, and in a lot of ways, that journey still isn’t complete. The sport is finally recognised by the International Olympic Committee. It will hopefully make appearances at Olympic events in the future, but you won’t see it covered by sports broadcasters in most countries or even most regions of the world. There’s a new exception to that statement, though, and the exception is the United Arab Emirates.

Finding success in the UAE is a sign of how far underwater hockey has spread around the world. As many of you will already know, it was invented as a training exercise for the Royal British Navy during the 1950s. Here in 2021, its growing popularity in the UAE has been picked up and reported on by The National, one of the country’s largest news outlets. They describe it as “quirky” and talk of it as if it’s a novelty, but it’s a start. If it helps attract more people to the sport, the article could significantly boost the country’s emerging underwater sports scene.

The story of the UAE’s nascent underwater hockey scene is told in the article by Lewis Cocks – a British ex-pat who now lives in Abu Dhabi. He first encountered the sport when he played it during his university days at home in England, but it was a niche interest there, and he didn’t expect to find any opportunities to continue playing when he decided to leave his home country. Upon arriving in the Middle East, though, he found people were more receptive to the idea than he expected – and he worked in the perfect occupation to encourage them to give it a try.

Mr Cocks is, by trade, a swimming pool and aquarium designer. His first job upon leaving the UK for (initially) Saudi Arabia was to design and build aquariums and swimming facilities for the most wealthy residents of the country, including – so he says – members of the Saudi royal family. He eventually moved on from Saudi to Abu Dhabi after accepting an offer to develop and become the supervisor of the UAE’s National Aquarium. The facility isn’t open yet, but he strongly advocated the idea of featuring underwater hockey inside the aquarium during the planning stages. He wasn’t sure he’d be taken seriously, but the responses he received were more encouraging than he expected. He soon found out why. The idea of underwater hockey wasn’t new in the UAE. In fact, there was already a team based in Dubai. Lewis had (somewhat optimistically) packed his old gear when he left the UK, so he decided to turn up in Dubai and try out for the team. That didn’t work out – but it didn’t put him off the idea of starting a new team in Abu Dhabi.

Lewis called his new team “The Abu Dhabi Ducks” and didn’t have the most auspicious start with him. Rather than having a home stadium or even a home pool, the Ducks trained and played their first-ever fixtures in his compound pool on his property. It wasn’t the ideal size for underwater hockey and didn’t have any lighting. Knowing that he’d never get far without a more professional environment to work in, he petitioned the Al Jazeera Diving and Swimming Centre for access to their pool instead. They accommodated his wishes, and the Ducks have never looked back since. They now play two fixtures each week, have team sponsors, and attract an ever-growing audience. With further sponsorship and greater visibility – as well as a developing rivalry between the Ducks and the team in Dubai – the sport has all it needs to get off the ground.

It’s difficult to judge what the potential for underwater hockey in the Middle East is, but it’s at least conceivable that it could become more popular than traditional hockey which, by comparison, isn’t popular in the region at all. We only need to look further afield to see how popular hockey can become, though. Not only do the official NHL video games sell millions of copies each year, but there are ten different hockey-themed online slots currently making money at online slots websites. Having one such online slots game would be an indication that there was at least some interest in the sport, but a whole ten (with Playtech’s “Ice Hockey” and Pragmatic Play’s “Hockey League Wild Match” the most popular) underlines how much enthusiasm for the sport exists. We’re probably a long way off seeing the first underwater hockey-themed online slots game reach players, but gaining a following in a receptive part of the world could be the start of that process.

While launching a successful underwater hockey league in the UAE is still Lewis’s dream, he’d still like to see more done to promote the sport in his home country. He might be edging closer to getting that wish. After eighteen months of closures, one of the UK’s most important underwater hockey venues recently re-opened in Plymouth after a sustained campaign by locals. Plymouth Life Centre Diving Pool is best known for being the place where Olympic Gold medallist Tom Daley trained in diving, but it also once hosted successful underwater hockey and water polo teams. The company responsible for the re-opening of the facility has already confirmed that both teams will return as part of the re-opening and hopefully attract new players and viewers in the process.

The fight to gain a larger audience for underwater sports is constant. While the public at large is perfectly happy to watch swimming and, to a lesser degree, water polo, the idea of playing any other sports underwater is still strange to most of them. They have no idea what they’re missing out on. Whether it’s underwater hockey, underwater rugby, or even underwater wrestling that eventually makes the breakthrough, many will surely follow where one leads. The more territories there are open to underwater hockey, the better, so let’s hope Lewis is able to keep working at developing his team in Abu Dhabi. If there’s enough money anywhere in the world to promote the sport and help it to reach new levels, it’s there!