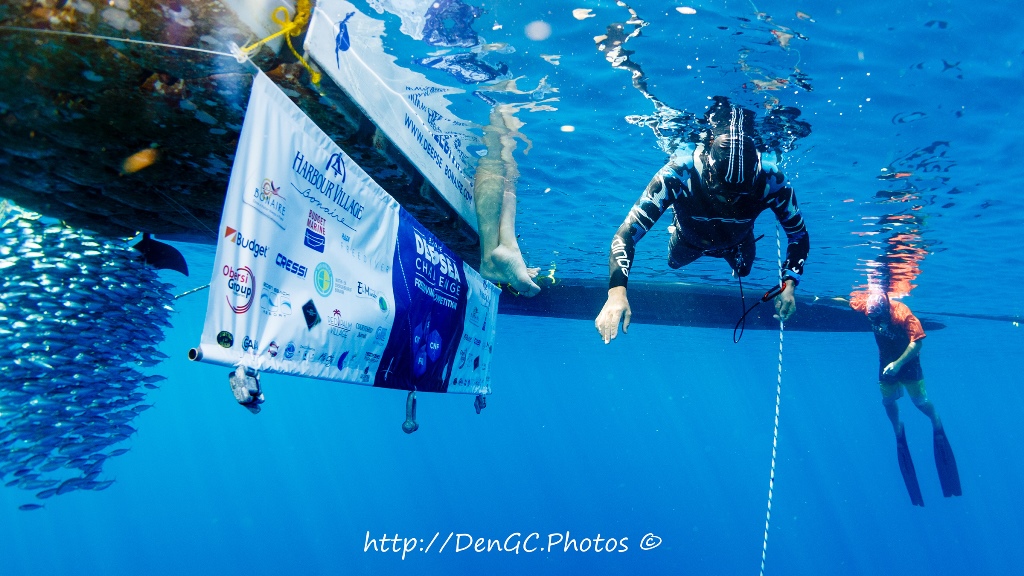 Kralendijk, Bonaire. Deepsea Freediving School is pleased to announce that this year’s Bonaire Deepsea Challenge was a great success. Carolina Schrappe (BRA) broke her own Continental South American Record at -101 meters on the 23rd of September in freediving discipline variable weight in a 3-min dive (Her previous record, 2016: -95 m) while other athletes achieved their Personal Best (PB) Performances. Kids and adults participated with original costumes in a colorful First Ocean Parade that welcomed mermaids to the Bonairean blue waters.

While nature stroke with all its power around the Caribbean, in the small yet idyllic island of Bonaire and just 500m from shore in the beautiful blue and deep waters, the annual freediving competition took place with the participation of athletes from Japan, Ukraine, the Netherlands, Brazil, UK and Venezuela. The 10 days event culminated in one Continental record, and multiple personal best dives. The competition covered four freediving disciplines Static (STA), Constant Weight (CWT), Constant No Fins (CNF) and Free Immersion (FIM) during 6 official diving days.

In a parallel record attempt to the competition, Brazilian Carolina Schrappe surpass her own Variable Weight (VWT) record, reaching to a 101mts depth for New Continental South American record (Previous record -95m 2016). VWT is a discipline where the freediver uses a sled to drag their down to depth while ascending by her own power with or without fins. Record was confirmed by AIDA judges Gaby Contreras from Venezuela and Christian Statler from Austria and witnessed by athletes participating in the competition, the logistic team and a group of international journalists that joined us for this beautiful event. 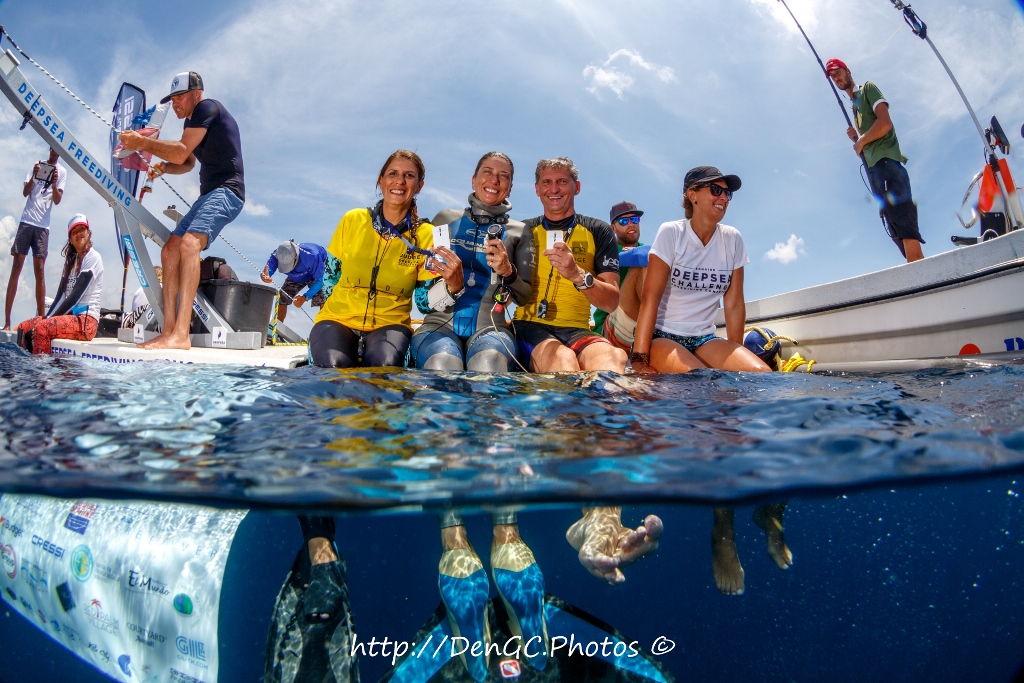 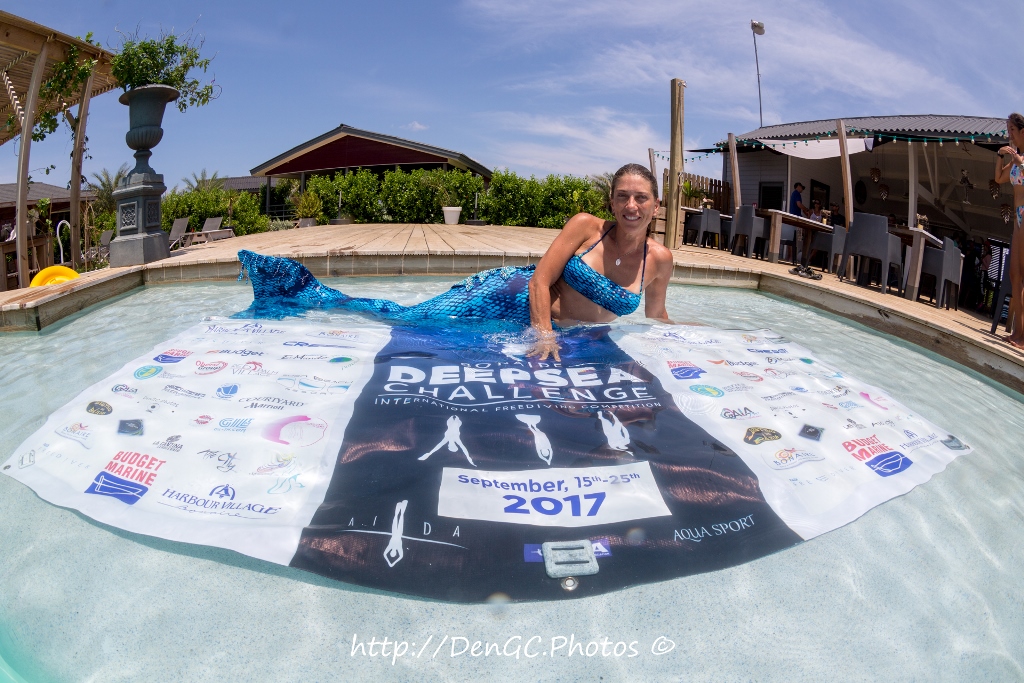 For second and consecutive time Deepsea Challenge Bonaire was filmed in 360o format out of the water and underwater by 360 hub producers led by Dave Faires.

International athletes attended the third annual competition. The island of Bonaire beautifully received high level athletes from around the world providing them with all the amenities of any major city including excellent grocery options, accommodations, rental cars, etc.

Notable performances from the event include dives from Tomoka Fukuda, experimented freediver from Japan, and recurrent guest on the island who reached -92mts in Constant Weight (CWT) and amazed us with an easy 5’21” breath hold that assured her title as Best Female Athlete of the competition. Novice athlete Israel Gil from Venezuela surprised attendees showing consistency among all disciplines positioning him as Best Male Athlete after achieving some of his Personal Bests. They both got an underwater watch courtesy of one of our sponsors: Cressi. Second and third place female Ekateryna Sadurska from Ukrania and Carol Schrappe from Brasil. Second and third place male Leon Jansen from Netherlands and Martyn Bromley from UK. 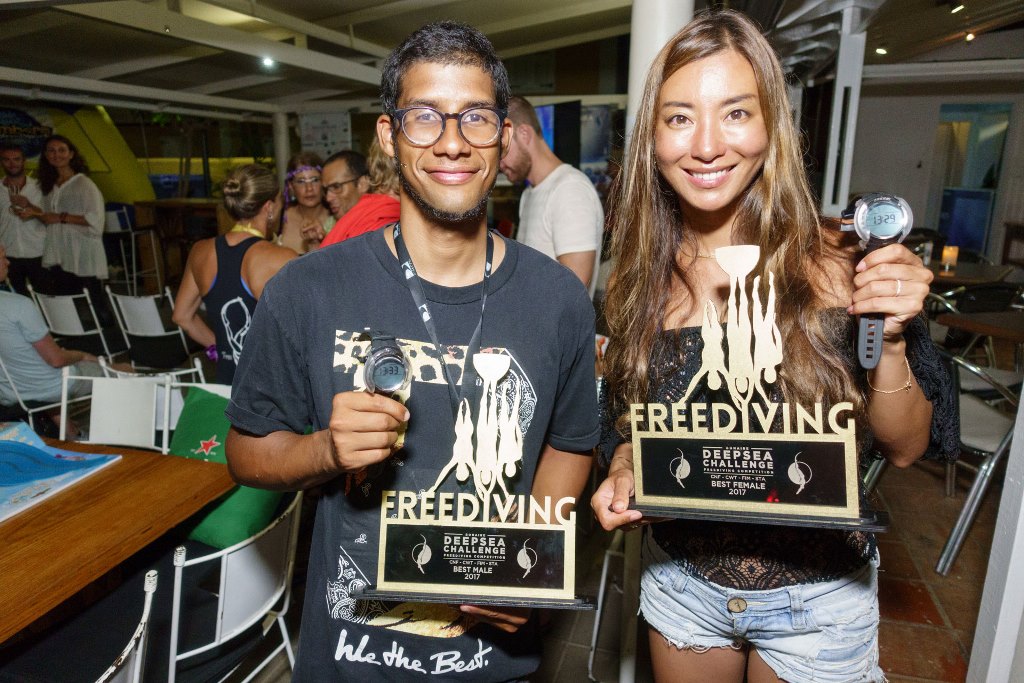 As part of the closing ceremony for Bonaire Deepsea Challenge 2017 and marking the beginning of the Caribbean Mermaid Festival. Mermaid Bonaire a new mermaid school on the island lead by Gaby Contreras organized this original event took the streets and the waters of Kralendijk hosting First Ocean Parade. The Parade was a friendly artistic event designed for people to express themselves by making their own creative art and outfit to celebrate the conservation of the ocean life and the mysterious mythology of mermaids and tritons. The event aims to create awareness on how humans contribute to ocean pollution as well as coral reef damage and call to take more actions to work actively to protect and prevent this. Ocean pollution is an ever-increasing global concern that threatens marine life, our environment, the economy, and human health. This unique and beautiful pro ocean life conservation carnival of colors parted from Parke Tului passing by along Playa, until El Mundo Restaurant where people from all ages showed their inspired outfits. Meanwhile different activities coordinated by Mermaid Bonaire School and the guest Mermaid Venezuela were taking place. Some of these activities included face painting, fish ID and ocean dance class by Mieke from Industry of activity. A best original costume contest closed the parade that ended in lots of smiles and wonderful prizes for the kids who participated

Bonaire has proved again one of the Top Freediving destination. With deep blue waters, plenty of marine life, support from the island’s best businesses, and a beautiful community of people Bonaire is sure to host many more events such as this one. The Deepsea Challenge is poised to grow bigger and better looking into the coming years. Plans include more involvement for spectators and live video feeds of the event! 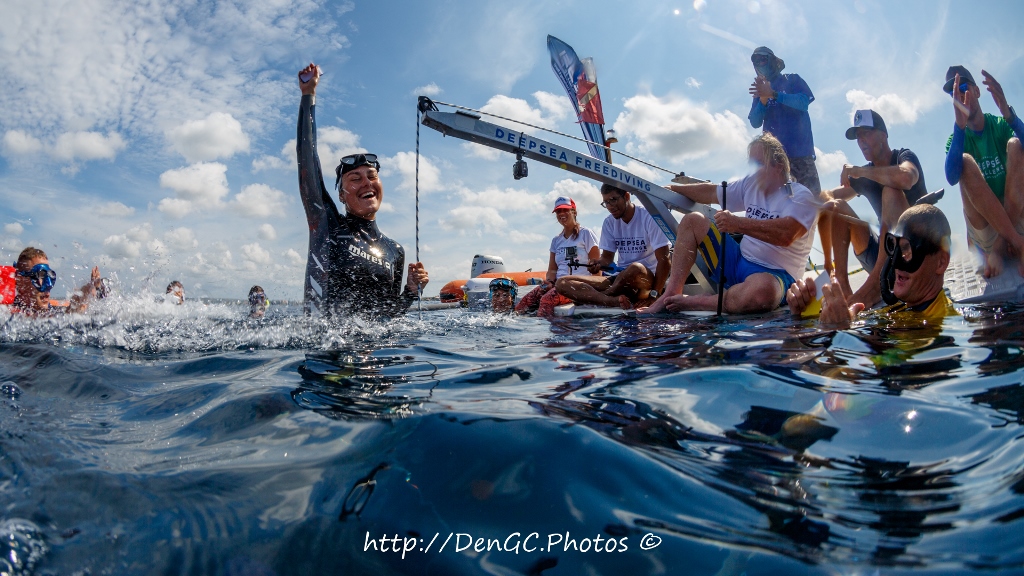 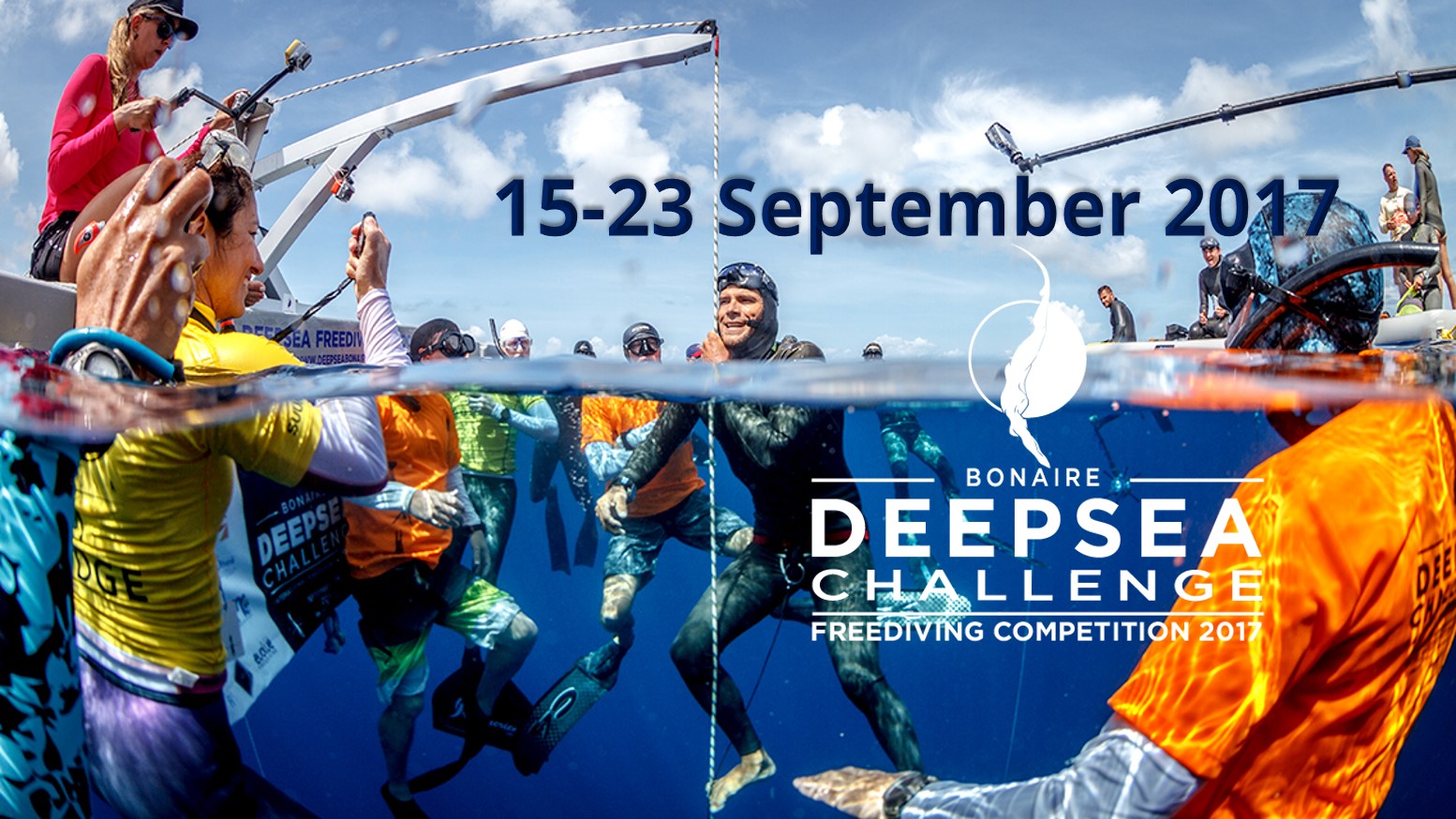 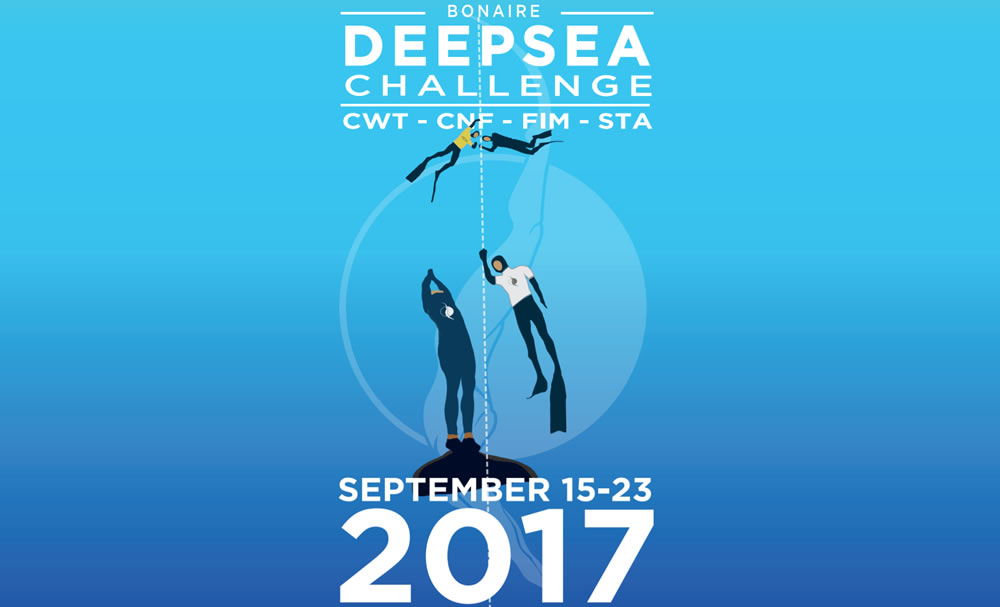